Taiwan’s rich cultural history began over 10,000 years ago! Since then many subsequent waves of people from Austronesia , China, Portugal, Japan,Holland, Spain, England, the Americas and other parts of the world have left their influence and their genes. Today Taiwan is one of the most modern and productive societies on earth. They have world class transit systems and a population that appears to maintain many ancient traditions while embracing the latest trends of both east and west. It is truly one of the greatest Asian cultural melting pots. Thanks in part to the precipitous topology and a relatively recent culture of conservation that occurred none too soon, the island’s amazing diversity also extends to the flora and fauna.

On this visit we rejoined our most excellent local Taiwanese wildlife guides Stone and Richard Chen for what we affectionately referred to as our “Taiwan recon” tour to try to improve our Taiwan wildlife photography while firming up plans for a Golden Gate Audubon Society tour in October, 2015. To say it was “fun” for us would be a colossal understatement…better perhaps to use some of the superlatives bestowed on some of our favorite bird species from other parts of the world: “Superb” as in Fairy Wren, “Magnificent” as in “hummingbird” or “Resplendent” as in “Quetzal”. And, if there were a bird named “delicious” (ironically, perhaps), that would be very appropriate indeed. 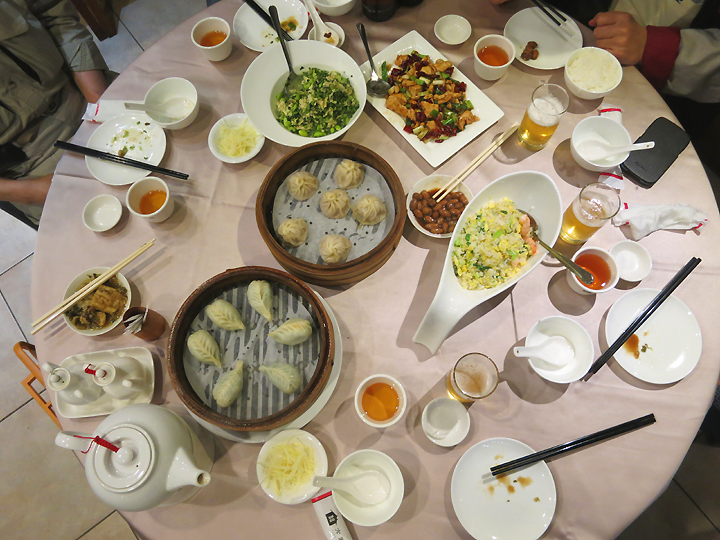 An incredible variety of fresh, beautiful and scrumptious dishes await the Taiwan traveler

Culinary expertise is highly regarded here and many foodies believe Taiwan has the best Chinese food anywhere. The incredible quality and diversity of the foods plus the warm hospitality are recurring conversation pieces when visiting here. Most every Asian cuisine – Cantonese, Hunan, Sichuanese, Taiwanese, Hakka, Japanese, Hong Kong-style – you name it and it is available fresh and scrumptious. Some of the more trendy restaurants incorporate western style food or invent new dishes such as Mo’s seafood burger with rice and seaweed “buns”…with a side of french fries of course. Man that was good! American fast food joints are in the larger metropolitan areas as well but with Taiwanese twists and nicknames. Stone and Richard referred with glee to KFC as “Colonel Kentucky!”. Most Americans will find it hard to believe the variety and high quality of street foods served in Taiwan’s many hundreds of 7-11 stores (yes, that 7-11) – but we ate there gladly after some initial skepticism. Creativity throughout the metro areas is especially emphasized as is the use of native plant foods such as wild fern in a lovely crepe we enjoyed at a small guest house / coffee plantation in Hualien.